Bundesliga star Jannik Vestergaard is a man of style and balance. We met up with the Danish international and Son of a Tailor ambassador for his take on staying – and dressing – sane in a mad, multi-millionaire world.

Jannik Vestergaard weaves his black Mercedes-Benz S-Class through the afternoon traffic. The sun sets slowly in the distance as he zooms across the bridge overlooking the Rhine, with Düsseldorf and its city center towering in the background.

Earlier this year, lifestyle magazine Euroman named the 25-year-old one of the 10 best-dressed men in Denmark. But to presume that he’s no more than a well-dressed, run-of-the-mill footballer would be to grossly undersell his smarts. On top of a two meter tall, athletic and lean frame sits a sage head filled with insight and reflection (and, on that head, his characteristic shoulder-length, blond hair).

As he navigates traffic on the Theodor Heuss Bridge, his fiancé Pernille by his side, he points to the city center. This is where Armani, Gucci, Kenzo, Hermès, Chanel, Burberry, and many others reside.

Düsseldorf, and particularly its high-end shopping street Königsallee, is known as the "catwalk of Germany" because of its large presence of fashion labels and fairs. Several times a year, a who’s who of fashion meets up here to agree on what Germans are going to wear the following season.

Chances are, Vestergaard won’t be joining them. He has found his own balance, sartorially and personally, in this sometimes-twisted world of football where ostentatious displays of wealth dominate.

“…It’s all about balance; I own a few things that are more luxurious and eye-catching – like Gucci and Balenciaga – but I pair them with Nordic, minimalist pieces that reflect who I am as a person.”

“I’m not a very flamboyant person, and I don’t wear conspicuous clothes. It’s all about balance; I own a few things that are more luxurious and eye-catching – like Gucci or Balenciaga – but I pair them with Nordic, minimalist pieces that reflect who I am as a person.

I suppose I would like it if people looked at me and thought, ‘okay, he dresses well’ or ‘I can tell that he’s wearing high quality clothing’. I don’t strive to look experimental. I came across some Berluti shoes in Paris and I’ve become really fond of them, because you don’t see them that often. Not everyone knows about Berluti. That makes it even better. They’re expensive, but they’re sort of understated and very high quality at the same time.” 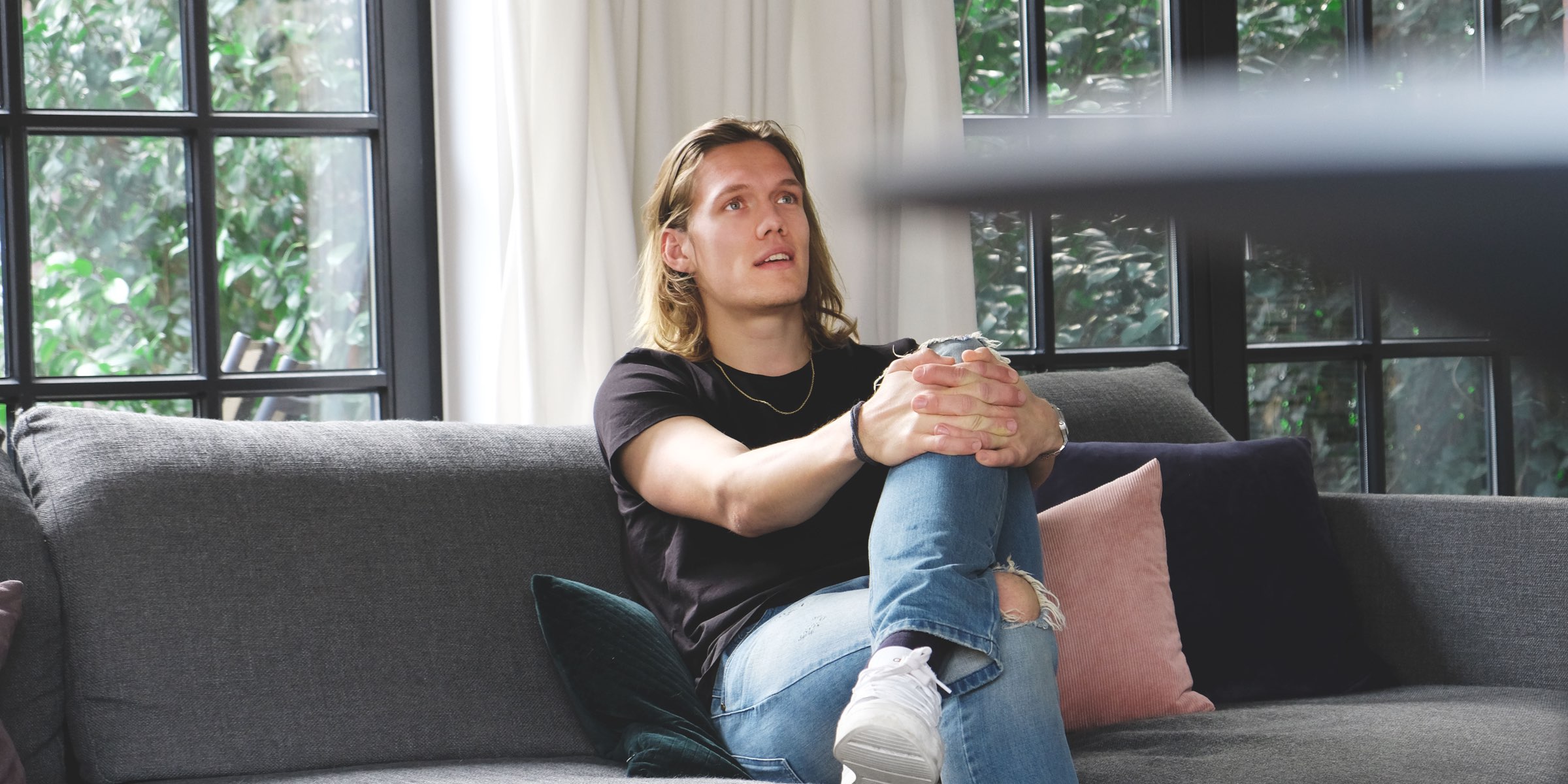 While Düsseldorf is home to all the brands that a young millionaire could ask for, Vestergaard has his mind fixed on a small tailor shop in Copenhagen. He is in the process of having a tailor-made suit sewn from scratch – and it’s perhaps the most important outfit of his life: his wedding suit.

“It’s an interesting process. I’ve been flying back and forth to meet with the tailor and do measurement and fitting sessions. During its creation it looks like they’re kidding me! The sleeves are missing, the fit is strange, but I’m really enjoying watching it come together, and I know it’s going to be great.

I think it’s a good reminder of the tradition and heritage of custom-fitted clothing; I’m paying for the narrative, the feeling of having something uniquely made for me by an expert that I’ve had to invest time and money in. With my build, it’s also necessary if I want it to look great. That suit will be in my wardrobe for many years to come and I’ll always remember the story behind it.”

He is wearing white Adidas sneakers; a white cotton T-Shirt (from his large collection of custom-fitted T-Shirts from Son of a Tailor); a wool coat; and light wash denim jeans.

The holes in the jeans reveal footballer’s knees: they’re slightly blue and bruised, the result of the Bundesliga game he played days prior at home to Dortmund in front of 54,018 people (“The pitch was a bit rough, but it’s not bad”).

His take on style seems to mirror his approach to life; fundamentally it’s about intrinsic value rather than extravagant display. That is a different take on consumption in a world seemingly driven by appearance.

“I focus more on quality and value than I used to. What does this piece of clothing mean to me?”

“I focus more on quality and value than I used to. What does this piece of clothing mean to me? Recently, I donated a lot of clothes. I thought to myself, ‘those are some pretty expensive pieces’. I had held on to them for a long time precisely because they were expensive and used to mean something to me. But they didn’t anymore. They just meant I had less space and fewer hangers. I haven’t at any point thought, ‘why the hell did I get rid of them?’. It’s actually a level of simplicity that I like and strive for. I still buy nice things, and there’s nothing wrong with that; I just do it with more purpose now.

I sometimes think, when it comes to clothing, that footballers here in Germany will wear anything as long as it’s expensive. It’s a lot of Dsquared, Louboutin and Philipp Plein. It seems to me that they consider themselves well-dressed because their clothes cost a lot of money. I don’t judge them; that’s just not what quality means to me. They could definitely learn a thing or two from the Danes,” he says with a broad smile. 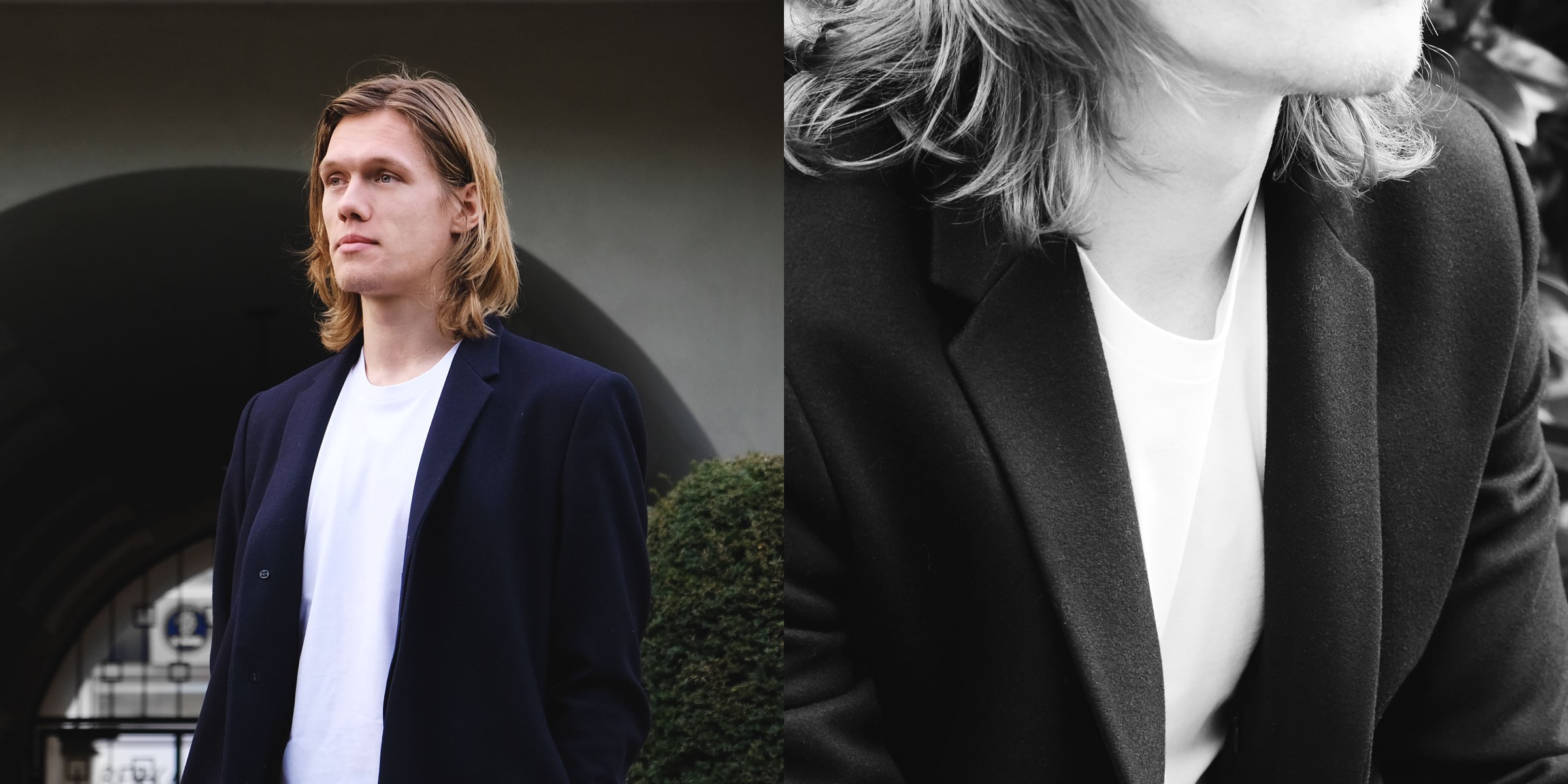 His outlook on life – and the self-assured maturity with which he speaks – was shaped in part by thrusting himself into a sink-or-swim environment at the age of 17. He moved from the comfort at home in Vesterbro, Copenhagen, to the Bundesliga club Hoffenheim in 2010.

Half-German on his mother’s side, he has had the country’s language and culture close throughout his entire life. But this was an upheaval that compelled him to come to terms with his values as a person at an earlier stage than most of his contemporaries.

“I was facing 28-year-olds in practice. They drove Ferraris and Lamborghinis, and they were just in a totally different place in life than I was.”

“I 100% grew up faster and more cynical because I challenged myself to take the leap. Everything was on my shoulders, and I just had to make it work. I was facing 28-year-olds in practice. They drove Ferraris and Lamborghinis, and they were just in a totally different place in life than I was. I started to relate to that, to compare myself with them. Locker-room talk in German is very different from the German I spoke with my grandmother. Everything became different. So in that way, I was forced to grow up quickly, both on and off the field.

On the other hand, I’m also in a world with so much money that there’s always someone ready to take care of you, so in that sense I’m probably not as hardened as, for example, students who have to make life work with much less. There’s always someone ready to wipe my ass when I’m done, you know? So there’s a risk that you become dependent on all the help you’re getting. I didn’t know the first thing about bank loans and investments. Those challenges that a student living in relative poverty has to learn on his or her own body, I have never had to face.” 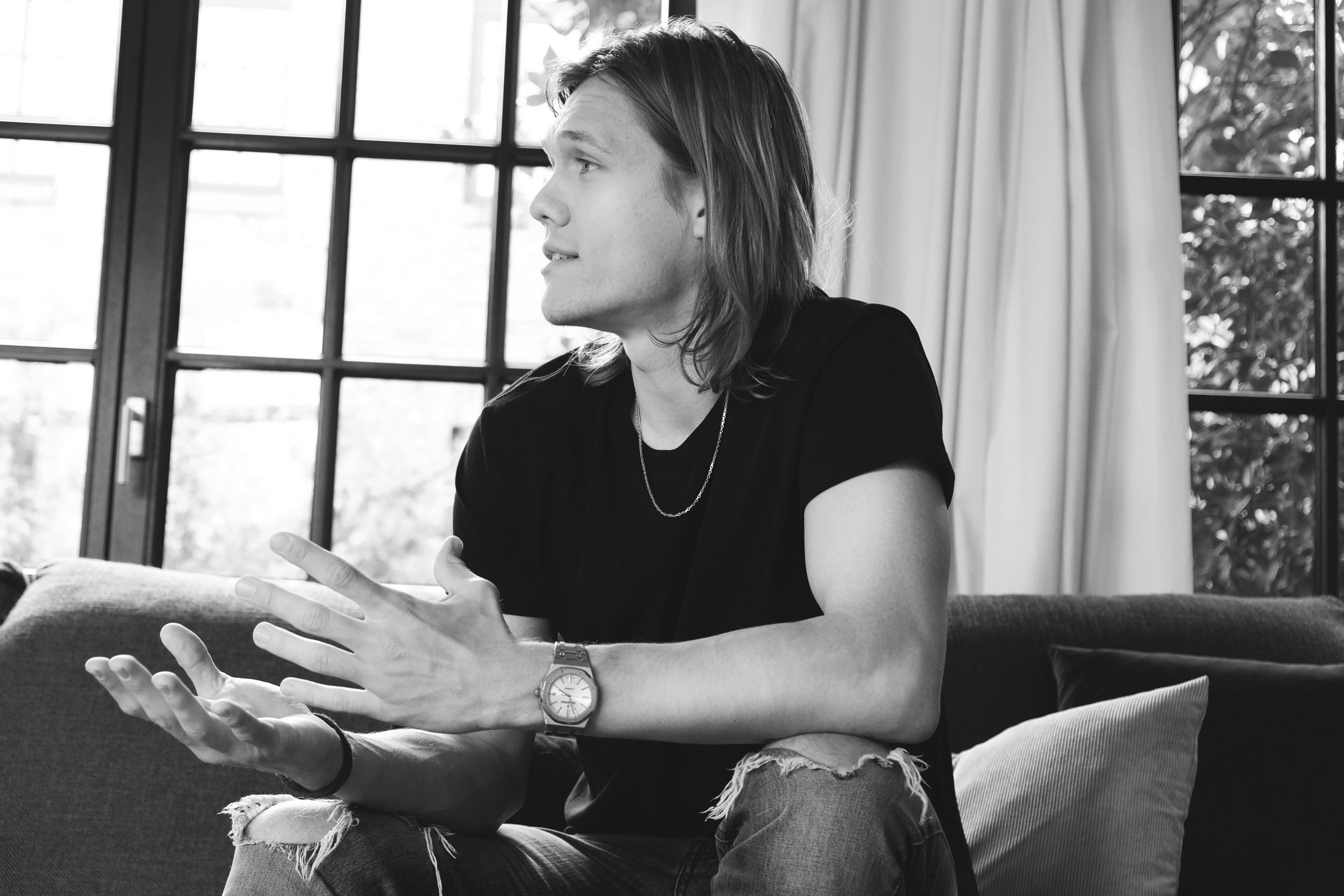 The engine roars as he zips across the bridge overlooking the Rhine (he is a footballer, after all, and as such has an affection for fast cars). A good half an hour drive west sits Borussia-Park where Vestergaard and his teammates play in front of sell-out crowds every other weekend.

While he stays aware of the pitfalls and hangers-on that come with being a professional footballer at the highest level – he credits his solid upbringing with helping him navigate in this world – he’s trying to do that one thing that everyone seeks, but so few people actually know how to: enjoy that amazing life he has earned – and staying in balance. 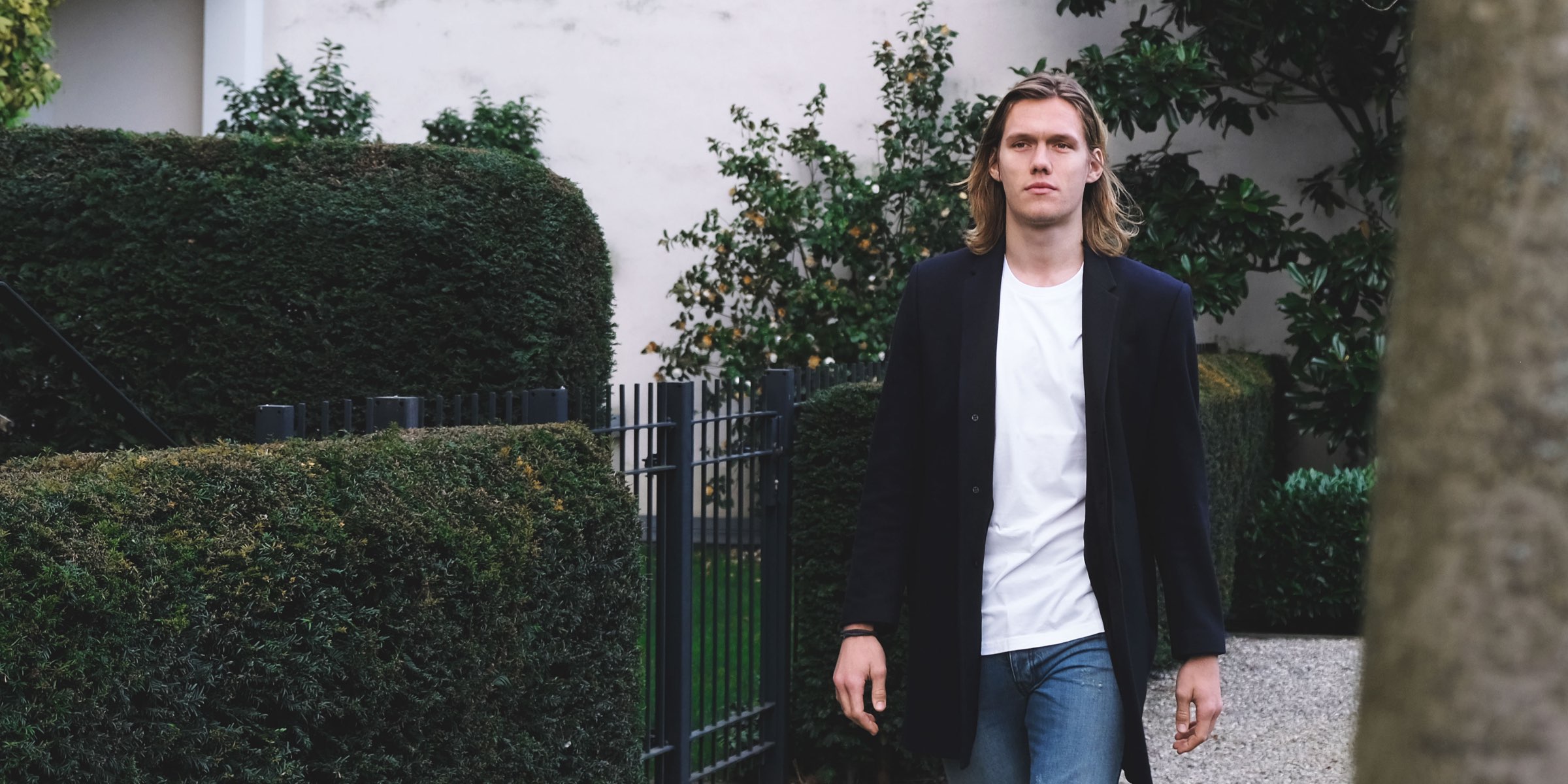 “I speak to people who, after their careers end, say: ‘All of a sudden, it was just over.’ Their careers went by so fast that they forgot to enjoy it. I think I’m fairly good at that. I can walk onto the pitch before a game and think, ‘Wow, this is pretty crazy.’ You know, people stand in the tunnel during stadium tours and aren’t allowed to walk on the grass, and I’m thinking, ‘I own this stadium!’. I strive to never lose that feeling. And I don’t take for granted this great life I’m living.” 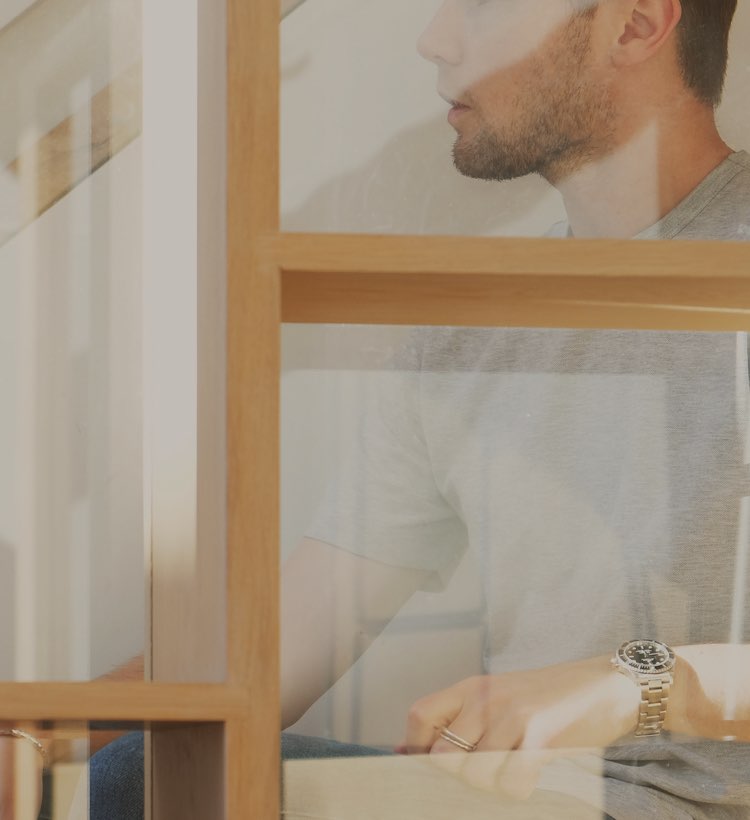 "People Care Too Much About Fashion"

Fredrik Risvik is an original on a platform of remixes. Son of a Tailor caught up with the Norwegian style-minimalist for his take on the distinction between style and fashion, his best fashion tips for men, and much more.