Eric Landon’s pottery has mesmerized millions of people. Something as humble as clay has allowed him to travel the world, become an inspiration for fidgety and anxious people everywhere — and helped him understand why good things don’t come fast or easy. You have to slow down.

A woman and her husband were on the final day of their workshop in Eric Landon’s studio. She was sobbing as she walked over to the American pottery maker and quietly said:

“I haven’t seen my husband so calm in these past two years.”

As a soldier in Afghanistan, her husband’s hands were maimed by roadside bombs. They had been put together by pins, and he suffered from severe PTSD. Now, in pottery, he had found an unlikely remedy. With his attention fixed to the sculpture he was slowly creating, there was nowhere to let his mind wander. Just unwavering focus.

That is, Landon says, one of the profound effects of craftsmanship. “There’s something about the connection between the brain and the hands. Creating is grounding,” he says. “It’s a thing that got lost along the way. When you do pottery, you can check out. I think everyone really needs that sometimes.”

“There’s something about the connection between the brain and the hands. Creating is grounding. It’s a thing that got lost along the way. When you do pottery, you can check out. I think everyone really needs that sometimes.” 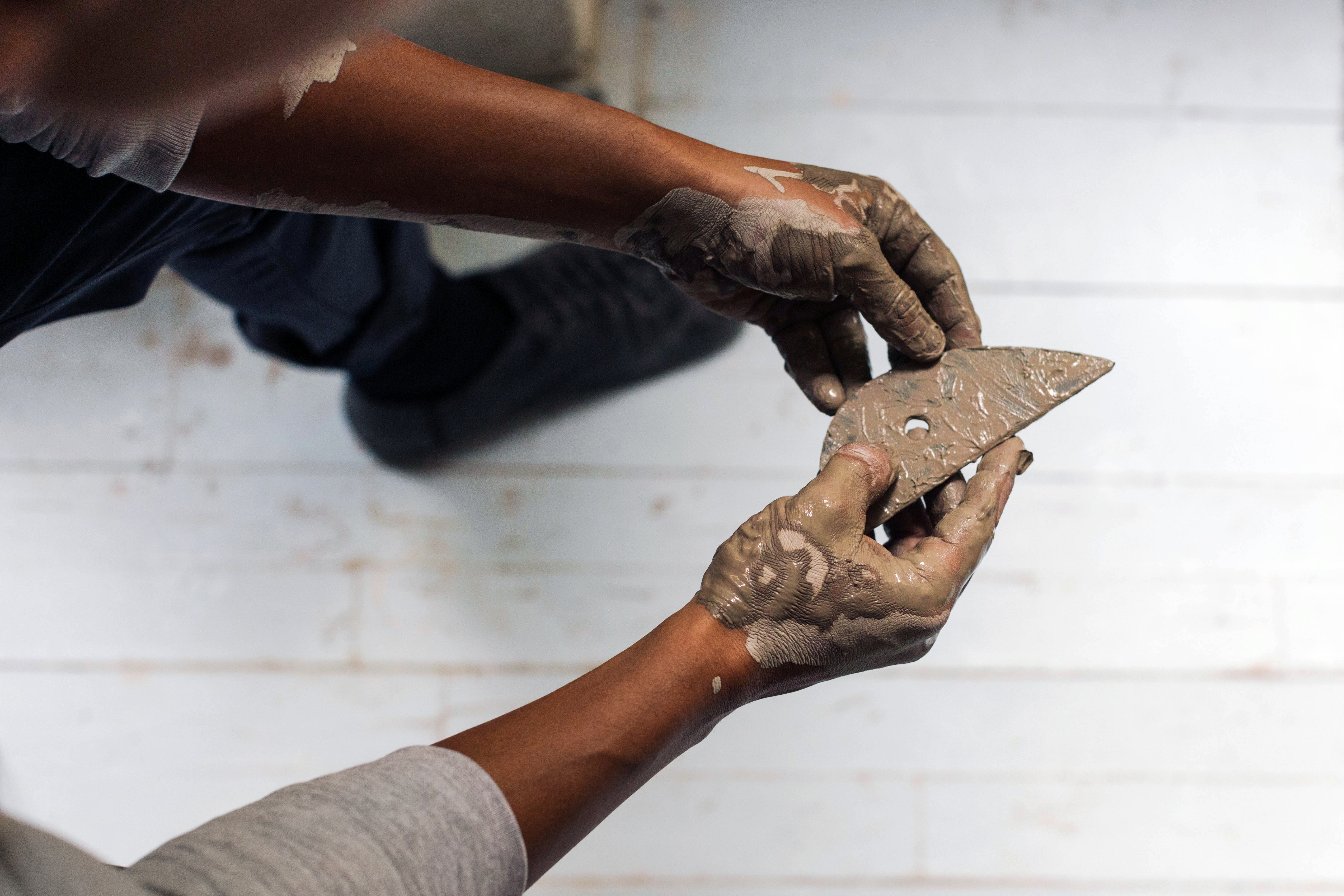 Eric Landon is the owner and founder of Tortus, a pottery and ceramics studio in one of Copenhagen’s buzzing downtown neighborhoods.

Four years ago he started filming his creative process and posting the hypnotic videos to Instagram; a year and a half later he had amassed 500,000 followers, been featured in the New York Times, and traveled — and still travels — around the world sharing his craft.

His videos serve as reminders of two essential truths: that there’s a certain beauty in being deliberately slow, and that true craftsmanship resonates now more than ever – even if we live in an on-demand, mass-production world.

“I did these videos where I really got across the beauty of the craft itself. It’s not necessarily about the object; it’s about the making. The making is just as beautiful, if not more beautiful than the product itself. And when you can get people to really appreciate that, suddenly you’re onto something that a lot of larger companies simply can’t do,” Landon says.

“The way I do things, it doesn’t match the industry. You’d never take clay in a factory and wedge it. It would take way too long. The things get pressed through moulds really, really quickly these days. I have to do everything manually. So every time I cut my clay, these are rituals that I need to have, but they’re also rituals that manifest themselves in really, really great materials that I can use to do my work. The slower I am, the more precision and refinement I’m going to get. Yeah?”

“Everybody’s had a dream or aspiration to be something – a dancer, a professional baseball player – I’ve aspired to do something pretty humble, which is to be a potter.”

In reality, Eric Landon says he’s a restless person. He speaks like one, too, with all the enthusiasm and off-tangent observations of a man with an intense passion for his craft. Landon sometimes follows his streams of consciousness with a determined “yeah?”, just to make sure his listener is walking the path with him.

His demeanor, however, is extremely tranquil. He says and does things with a purpose. It took him a while to get there, and it’s all down to the patience and appreciation of the process that pottery taught him.

Landon grew up in Milwaukee, Wisconsin. His first encounter with pottery was in high school when he took a ceramics class. He went on to study economics in college (and did really well at it), but he found himself alienated by the intangibility of finance. And so he kept returning to the potter’s wheel for peace of mind.

“Everybody’s had a dream or aspiration to be something – a dancer, a professional baseball player – I’ve aspired to do something pretty humble, which is to be a potter.”

“From the first time I tried it, it gave me this calm that I’ve needed for my entire life. It’s not just something I do because I want to make a beautiful vessel. I do it because it fills a real need that I have. I also think people can sense that. When they buy my work, they know it’s made from my need to do a great job, to find myself through my work.” 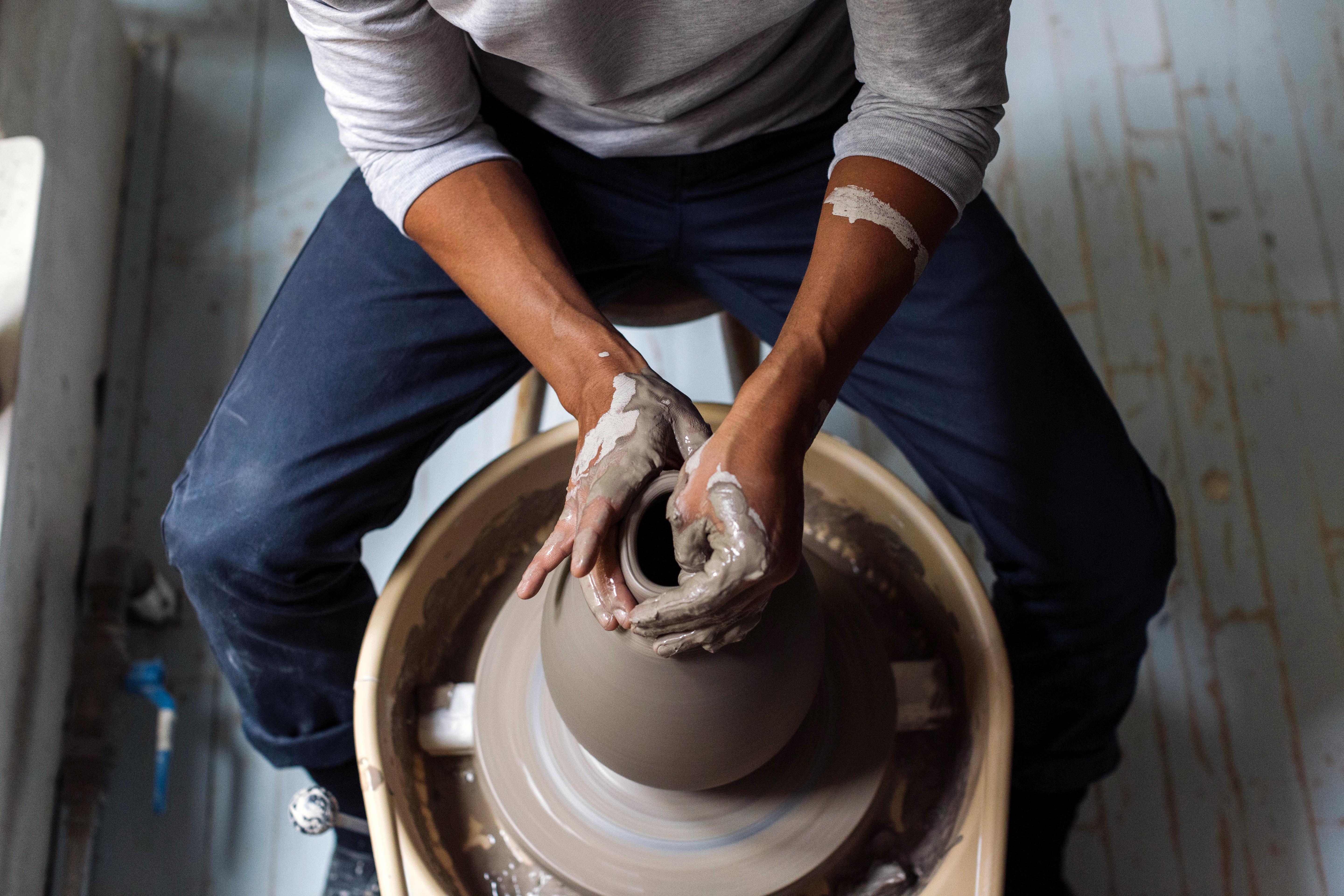 Landon often hosts workshops in his Copenhagen studio, and it seems it’s just as much a course in mindfulness as it is in pottery. Hence, the student body is diverse.

“I have attorneys and bankers coming over from Manhattan. I have people who work in architecture, jobs with lots of deadlines and high stress. And one of the hardest things they have to do in the beginning is to settle down. But pottery forces you to settle down.”

During day three, he says, he can see the calm washing over most of his students.

“Making is inconvenient. Because people can buy things in Ikea or wherever, but I think when people start to make again, they get addicted to it. They get in touch with a part of themselves that they may have never experienced since grade school. Drawing and creating stuff,” Landon reflects.

“We live in a world of these abstract things. I think people seek things that are more basic and tangible. Things that are easy to understand. Clay is not abstract. You take a lump, put it on a wheel, it spins, you put water on it. It’s these real things, real forces, it’s gravity, it’s centrifugal force. You’re confronted with real elements. It’s real! I think people are seeking that these days.” 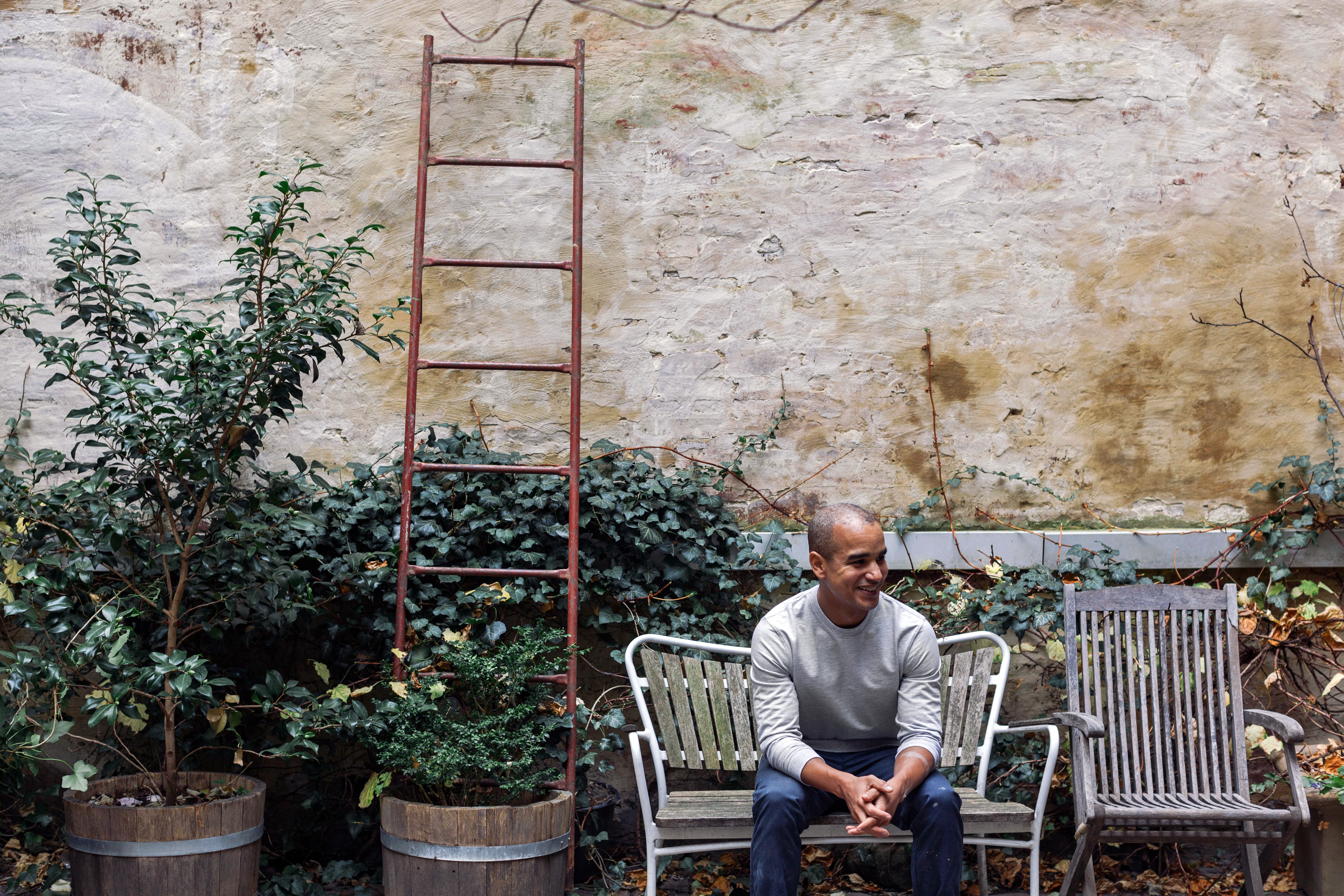 “I think Son of a Tailor is an interesting concept, because when you have something that’s customized and tailored to yourself, it gives you so much more value.”

The phone in the studio’s backroom rings, briefly halting Landon’s train of thought. He picks it up and, in fluent Danish with only a hint of an accent, belts out: “Ja, hej!”

It’s his 17-year-old son, Andreas, who often visits the studio to “throw” – industry lingo for working with clay on a wheel – and is pretty damn good at it, according to other people working in the studio.

“Hi Andreas, do you want to throw? Just take some clay!”

The name Tortus is, of course, derived from tortoise, or turtle. This is fundamental to the philosophy of Landon and his partners. On their website, they state that “Tortus is about the love of making and passion for materials. So like the noble creature, we move at our own humble pace.”

So what is it that allows them to move at a humble pace amid relentless optimization?

“You know, not everything should be convenient. Convenience is a luxury that sometimes comes at the expense of other stuff, such as responsibility and production standards. I’m willing to pay good money for something that’s made well, that I’ll probably have for longer, something that’s made with really good intention and with the respect for the materials,” Landon says.

“I think we’re entering an age where people are starting to value that if you want something great, it takes time. I think Son of a Tailor is an interesting concept, because when you have something that’s customized and tailored to yourself, it gives you so much more value.”

Landon himself will interact with fans and prospective customers on social media, and he’ll use their input to inspire his next pieces. It’s something that lets him know that they’ll value it much more and give them a bigger sense of ownership.

“Because they helped create it. Like Son of a Tailor. Smaller companies have the flexibility to do that, but larger companies need to figure out a way to do it.”

"Something so small means so much to me. The thing that’s most rewarding for me is not my own work; it’s how it can help other people."

He is in the process of opening up a second studio in Copenhagen near the landmark Rundetårn. He still travels far and wide to host workshops – last Spring he gave 24 of them around Australia. But when things get crazy, he seeks the wheel.

To give an example, he was offered a cameo in Snoop Dogg and Martha Stewart’s cooking show a few years ago. VH1 asked him to take part in an ad, which would have seen him making cake instead of clay.

“A couple of years ago it was crazy because of the viral stuff on social media. I was contacted by so many news outlets in the U.S., by Google and all kinds of companies who wanted to do campaigns and stuff, and that’s when I needed the wheel more than ever. If I didn’t have pottery, I’d make irresponsible decisions”

Yet social media is also what gives him some of the most meaningful moments with pottery.

People write amazing messages to him, he says. Some suffering with anxiety and depression watch his videos and tell him that it gives them a level of calm.

“There’s a woman who reached out to me. Her son suffers from a mental handicap, and he’s addicted to my videos. He loves watching them. She said, ‘your videos do something to my kid. It’s amazing to watch him watch you throw.’ Something so small means so much to me. The thing that’s most rewarding for me is not my own work; it’s how it can help other people.”

Eric Landon’s ability to shape clay has allowed him to live and share his passion. But the real question probably is: Who’s shaping whom? 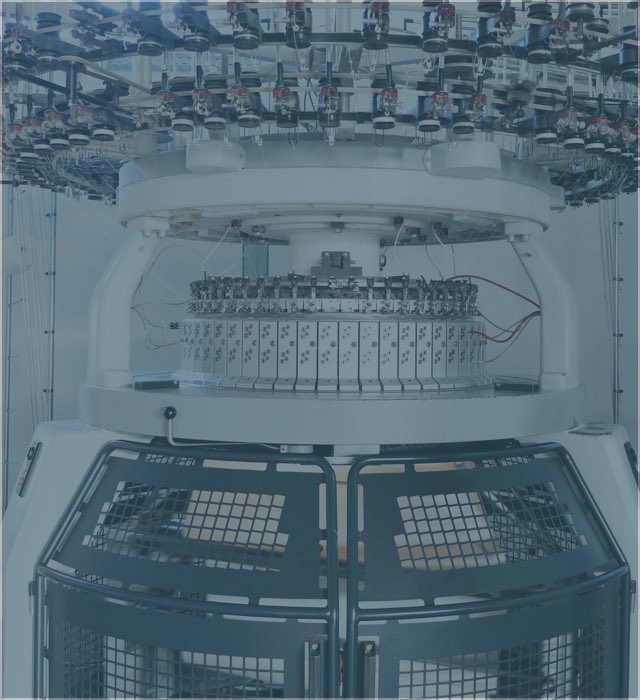 These days, it seems everyone in fashion is asking: "How do we make things faster and cheaper?"